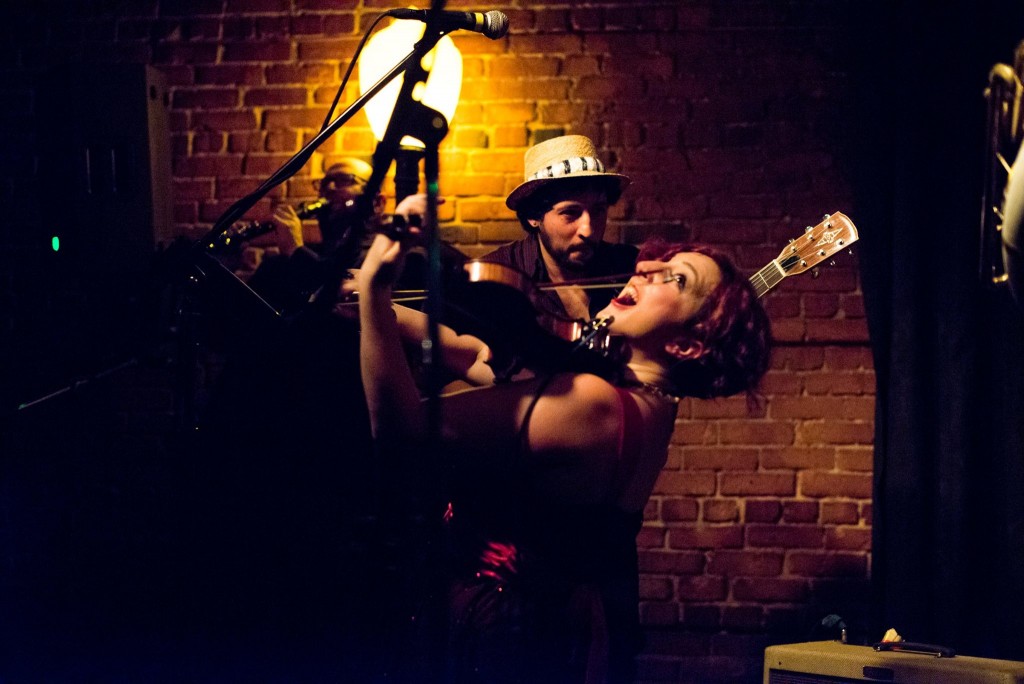 The Debaucherauntes, with Mai Li on violin, David Ezekiel Hererra on guitar, and Dan Kaplan on clarinet (Photo by Tobin Holliday Photography)

In Chapter 4 of Oy Oy Oy Gevalt! Jews and Punk, I look at different ways that punk has had an impact on klezmer and other types of Jewish music. It’s too bad I didn’t know about The Debaucherauntes sooner. The below interview with Mai Li, the singer and violinist of The Debaucherauntes, sheds light on a core focus of Chapter 4: What’s it like when a musician who has played in a punk rock band brings punk musical elements, sensibilities, and identity to music that isn’t punk rock, particularly klezmer? The Debaucherauntes would’ve fit in quite nicely as part of the section in Chapter 4 that includes Golem and Daniel Kahn & The Painted Bird.

The Debaucherauntes are a klezmer fusion band from Seattle, Washington, that formed in 2009. The group released an album called Different Parade in November and put out “Ale Brider” as a single from that album. The band incorporates numerous musical styles as part of its fusion approach, but The Debaucherauntes specifically said that “Ale Brider” had “a punk rock sensibility.” I reached out to Mai Li to dig deep about what was “punk” about this klezmer fusion song.

What’s punk about The Debaucherauntes’ version of “Ale Brider,” in terms of your vocals and the music itself?

Man. Talking about the punk credentials of “Ale Brider” (or anything, really) gets really sticky quickly, because it all comes down to how you answer the question, What is punk? …

Without trying to turn this into a thesis that defines a genre, the musical elements I focus on are the simple, raw, heavy, dancey, populist groove—the kind you might find in Gogol Bordello or folkpunk bands. … We all love throwing rock tropes (like the big “rock finish” at the end) into the form for fun …. I use a lot of yelling, growly vocal textures with my “oys,” and I take a lot of pleasure from finding subtle ways to channel my days in punk bands in college with that, and try to keep the sound driving forward. I’m going for the kind of sound that people could mosh or skank to as much as mayim [a Jewish folk dance] and [that] makes people want to shout back “OY OY ALE BRIDER.” I love singing back to bands at punk shows—it’s so charged, raw, and real. It’s not about technique or sound; it’s about feeling and power and being a part of something bigger. And I’m so happy that both Jewish music and punk rock have great sensibilities for that to draw on culturally, since it comes from both places for me, and the mechanics work so naturally together.

You’ve said that The Debaucherauntes’ version of “Ale Brider” has “a punk rock sensibility.” Beyond the sound of the music itself, is there something punk about your approach to the song?

For me, expressing my Jewish identity in itself is often an act of rebellion, largely because of the ways aspects of my identity intersect. … Carving out a space for your identity, when it’s something people don’t understand, just takes a fair amount of work, especially when your other marginalized identity subcultures (queers and polys) have often had to reject religious families, communities, or upbringing to be who they are ….

And hell, let’s not f*cking pretend being a weirdo Jew is easy inside the Jewish community, either. … There’s a lot of class and diversity issues I’m on the “wrong side” of: being a working musician, and queer, and poly. I have to defend my choices and my identities a lot. … It takes a significant amount of effort just to show up and be present in the Jewish community and be who I am.

So, I exist in this tiny, tiny space, pinched between [what] the outside world sees Jews as and what Jews think “we” are—both “we”s that usually don’t have someone like me factored in. And then you get this song that was popularized during the Bund labor movement, about how we are all brothers and sisters, about how we should love each other “like newlyweds” (WINK), how we’re all singing together. …

It’s a little bit of counterculture movement …. There is so much diversity, subversion, celebration of shechina, ridiculousness, sexuality, and skepticism in our traditions, and so much story of being “other.” I would love more people to spend time celebrating that and worrying less about who is making money or does/doesn’t deserve to get married. Getting there feels like mounting a rebellion, and a restoration project on a historic building, all rolled into one.

You’ve called “Ale Brider” “our party anthem version” an­d said you “don’t know why more klezmer bands don’t rock the f*ck out on this song.”­ In the context of klezmer fusion, do “party anthem” and “rock the f*ck out” equate with “punk”?
While I don’t think “party anthem” and “rocking the f*ck out” necessarily equate with punk exactly—every culture has a way to party—there’s a certain flavor of the punk there. I don’t know why more klezmer bands don’t intensify this song into the huge, cultural celebration anthem it feels like it should be to me, so approaching that divergence like this, by challenging it, feels punk to me. And there’s a kind of “F*ck it/ F*ck you/ F*ck off, we’re drinking and partying as a bunch of weirdos/Jews/weirdo Jews and we don’t give a f*ck if you like it or not” vibe to how that party happens that also carries a punk flavor to me.

It’s never about the party, it’s about context, subtext, and vibe—who is it, and what is it doing, and what does it represent? Is it powerful? …

Are there any other Debaucherauntes songs that specifically have punk (or “folk punk” or “Gypsy punk“) elements to them, and what does that mean in the context of The Debaucherauntes’ music?
“Different Parade” I really like to call “circus punk”—I mean, it’s a song about running away from your problems, only to have new ones catch you, and a large part of that song is running off to join the circus. But the circus parts of that come in musically with the silly theatrical elements—the hard switch to blues and mariachi, the sudden “circus waltz” maestoso at the end. But in that song, the punk elements are similar—a driving force, an attitude …. I’d argue there’s strong elements of folkpunk in most of our fast instrumentals (like “Nakht in Gan Eydn” and “Goldenshtayn D”).

How significant a part of the band’s klezmer fusion stew is punk (or folk punk or Gypsy punk)?
It’s really hard to say what proportion of the stew they are, though, [you know]? It’s like, if you’re making a big pot of soup, and you put in 5 handfuls of potatoes, by the end of it it’s hard to tell where the potato ends and the other flavors begin. Especially if you had to add more potatoes or more something else to balance it later on. We just kind of taste it until each song feels right …. This band is also a lot of things, one of which [is] our punk (or folkpunk, etc.) elements, which breathes with the avant-classical expansiveness and the hot jazz and the creepy vaudeville cabaret. It’s not everything, but it’s present, and it grows in its own way over time alongside the other stuff, it’s just hard to tell how much or how fast or how often.

That said, I feel like folk punk or “gypsy punk” (I really try to avoid using that term, because it impacts the Romani so negatively!) is a really solid baseline for our fastest and hardest-hitting dance tunes. I like to think of us as filling the space between Gogol Bordello, Beats Antique, and Amanda Palmer, except from a Jewish voice; a fair amount of grit and intensity factors into that balance, just not on every song. … But the ones that get the floor going and make you want to pound your fist in the air seem like they have that core element in their spirit, and that kind of ruach in a band like us feels like a really special thing. I don’t think we’re planning on doing anything that dispels that magic! 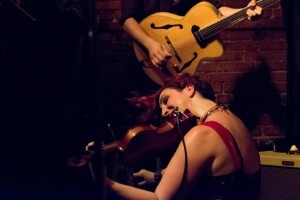