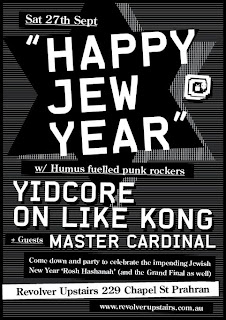 I’ve written about the High Holidays a lot since 2005! There’s too much material to do a comprehensive post, so here are some highlights.

All of the following blog posts about veganism and animal protection are from heebnvegan, the Jewish/vegan blog that I ran between 2005 and 2010. I wrote related High Holidays articles for other websites, but they haven’t survived the changing tides of the internet.

My first article about Jewish punk was for New Voices in 2005. I interviewed Alicia Jo Rabins, who played fiddle for Golem and previously KOSHER. She said, “Playing in KOSHER was a way to say, ‘I have a lip ring and green hair, and I’m also gonna fast on Yom Kippur, and I’m not going to deny either of those things.’” That’s a quote I’ve used widely ever since.