The Hard Times is a punk version of The Onion. The fake news stories are often hilarious and relatable.

On Thursday, for the third time in the last year, The Hard Times featured a Jewish punk story. Considering that the timing aligned with Hanukkah this year, Rosh Hashanah this year, and Hanukkah last year, The Hard Times apparently made deliberate decisions to run Jewish content around Jewish holidays. I say, job well done and keep it up! Here’s an overview of all three. 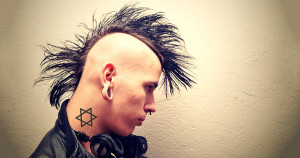 The frontman of Jewish punk band The Oi! Veys got a tattoo last week of an upside-down Star of David to express his rebellious identity, disappointed family sources confirmed.

“I know my relatives say I can’t get buried in a Jewish cemetery now or whatever,” explained frontman Isaac Schreiber. “But my drummer’s rabbi said he’s fine with tattoos… not that I need permission. That’s why I got the inverted star: it’s just about rebellion for me. If people get offended, feh!”

As for the design’s striking resemblance to a regular Star of David, tattoo artist Marco Armendarez was diplomatic.

“It’s not my place to give input on a client’s design, except for practical purposes,” Armendarez stated. “Does it look like a normal Star of David? Sure, maybe some people would say that. All I care about is making my clients happy. That’s why I listened when [Schreiber] asked me to rotate the transfer 180 degrees before applying it to his skin.”

“If you’re a punk, any moment is a chance for rebellion against the powers that be — whether that’s a rigid capitalistic structure, or a rigid dance structure, it’s all the same thing if you think about it,” said Meyers, catching his breath. “Plus, Jews were the first punks. G-d told them to go to the Promised Land, and they were like, ‘F*ck off, you old fascist!’ and spent 40 years in the desert, instead of listening to The Man. Johnny Rotten and Moses were basically the same person.”

Unfortunately, most attending were extremely disappointed by Meyers’ actions.

“Sure, it livened things up for a moment… but he knocked my grandma into the chocolate fountain, and that fountain was the only reason I agreed to learn Hebrew,” said Goldstein. “And he ruined all my gifts when he flipped over the gift table and pogoed on them.” 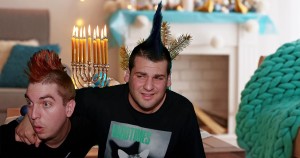 “A lot of garbage mainstream pop-Jews will tell you that Hanukkah is supposed to be eight nights long,” said 22-year-old Max Rabinowitz, sporting a tattoo on his right bicep with the anarchy circle inside of the Star of David. “But we light our menorah so g*ddamn fast and loud, we rip through the whole holiday in three days. We do two candles a night for three nights, and then just end it there with six, because f*ck the last two.” . . .

“Punk Hanukkah is just like your average punk song. You do things your own way and say, ‘F*ck the rules.’ So we do the holiday however we want,” Irving Rabinowitz, Max’s older brother, confirmed. “Sh*t, sometimes we don’t even use a shamash candle.”

Sharon Rabinowitz, the matriarch of the Rabinowitz family, explained that coming from a hardcore punk background has shaped all aspects of her family’s life, including religion — even if punk is not seen as “classic hardcore” within Judaism.

“We might be hardcore Jews, but we’re not orthodox or anything — we’re conservative. So we prioritize doing Jewish things as hardcore punks, rather than hardcore Jews,” she explained while spinning a Minor Threat-themed dreidel. “For example, our son had a laid-back, conservative Bar Mitzvah during his service, but there was a massive f*cking circle pit for the Horah. We tore that sh*t up. Temple Beth B’Nai Chayeinu hasn’t been the same since.”

Images courtesy of The Hard Times