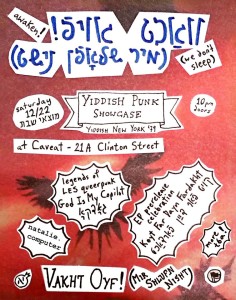 When it comes to music, the weeklong Yiddish New York festival doesn’t only have top-notch klezmer. On Saturday night, there was a late-night Yiddish New York Punk Showcase on the Lower East Side. “Yiddish music and punk rock go together in this neighborhood,” explained Rozele, the lead singer of Koyt Far Dayn Fardakht, from the stage. 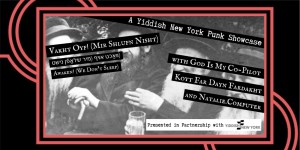 It was my first time seeing the queer/trans Yiddish punk band Koyt Far Dayn Fardakht. In case you don’t speak Yiddish, their name translates to the Filth of Your Suspicion. And if you don’t speak Yiddish, you’d benefit from the band’s lyrics zine, which was available at their merch table. “It’s harder for folks to sing along unless they’ve had something to look at,” Rozele said during the band’s set. 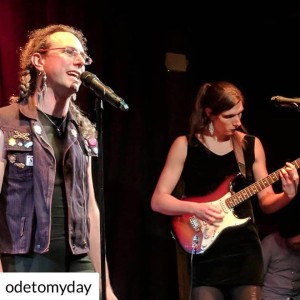 Koyt Far Dayn Fardakht closed out their set with “Arbeter-Froyen” and “Dire-Gelt,” acknowledging that they’re more familiar songs. I knew the songs because of Daniel Kahn & The Painted Bird and Golem, respectively. In an interview for Punk Rock Hora, Rozele explained:

Anyone thinking about Yiddish political repertoire is going to come to “Dire-Gelt” pretty quickly, because it’s one of the political songs that’s most widely known at this point. For anyone thinking about punk and the Yiddish revolutionary repertoire, it’s going to jump out even more, because of that “oy! oy! oy!” chorus (echoing British Oi! bands and U.S. hardcore bands) and the importance of land struggles—including housing struggles—to any movement for justice. …

Because “Dire-Gelt” is so widely played, it’s useful for a contrast between fusion bands like Golem and a punk band like us. Probably a better contrast, though, would be between our arrangement of “In Zaltsikn Yam” and Dan Kahn’s—he, unlike the Golem folks, is an explicitly political musician working in a fusion idiom and looking to older Yiddish music as a political resource. 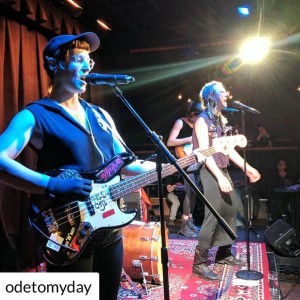 Headlining the concert were G-d Is My Co-Pilot. Until I learned about this show, I didn’t know that the band, which had been active in the ’90s, had reunited. Guitarist Craig Flanagin is part of the new lineup, but original lead singer Sharon Topper has been replaced by Normandy Sherwood. They were joined by Klezmatics trumpeter Frank London; it was at least the fourth different band I’ve seen him play with this year. 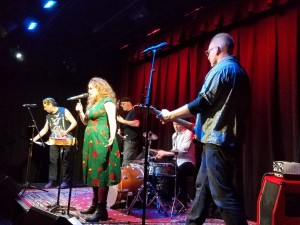 G-d Is My Co-Pilot (Photo by Michael Croland)

There was a great vibe for the show overall and especially the crowd. With Yiddish New York bringing together Yiddishists from far and wide, the bands had a receptive audience.