Nederlandsch-Israëlietisch: Tracing a Sliver of Family History in Rotterdam, Holland 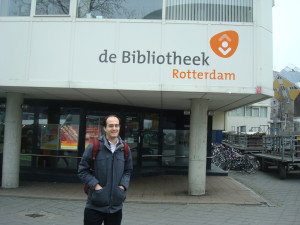 Me in front of the Rotterdam library

In 1921, my great-grandparents were emigrating from Russia to the United States. On April 1, when the ship was docked in Rotterdam, Holland, my maternal grandfather, Max Schwartz, was born. On April 8, he had his bris in Rotterdam. Twenty-three days after he was born, they reached the U.S. He wasn’t a Dutch citizen, he never identified as Dutch, and he never had any desire to return. He’s the only one of my grandparents not born in the U.S., even if just barely. He’s also the only one of my grandparents who died before I was born.

A couple weeks ago, I was in Amsterdam for work. I’d been to Amsterdam on vacation in 2009, and I didn’t go to Rotterdam (less than an hour away by train) then. This time around, with a paid trip to Amsterdam, I didn’t want to miss the opportunity. It’s such a small piece of my family history; I can jokingly claim that I’m Dutch, but I have to admit that I’m not. Still, it is a detail in my family history and I was glad to embrace it for just one day. On Saturday, December 17, I went to Rotterdam for Shabbat services, a walking tour, and a harbor cruise.

One might think that my connection to Rotterdam was tenuous, but I brought copies of my grandfather’s birth and bris certificates (in Dutch) and made the most of my experience. There were six themes from Jewish tradition, customs, and history that stood out as common and resonant. This wasn’t the-tracing-my-family-history trip I would’ve had in Hungary, Poland, Russia, or Ukraine, but it did make me relate to and appreciate the power of those Jewish elements.

Ashkenazi naming: I don’t think much about how the “M” in my first name is after my grandfather or how my Hebrew name, Mendel, is taken from him. Of course, it’s Ashkenazi naming convention to honor the dead by naming a child after them, but that was more meaningful to my mother and my grandmother, who knew him. At the shul in Rotterdam, I received an aliyah. When Mendel was called from the bimah, it was as if he and I were both being announced. I couldn’t think of a more fitting tribute than having his/my Hebrew name called for an aliyah in the city where he was born. 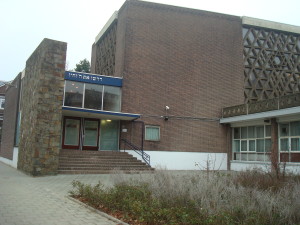 The synagogue I went to in Rotterdam

Hebrew prayers: The siddur at the shul was in Dutch and Hebrew, and I couldn’t follow along with the Dutch. The Hebrew prayers were the same as the Hebrew prayers recited at any Orthodox shul in the U.S. or elsewhere. While I don’t typically go to Orthodox services, it was striking that I was able to follow along just as well as if it’d been an Orthodox service in the U.S. I’d had the same realization when I went to services in Italy in 2009: These prayers are universal, and although the Jewish people spread out in the Diaspora, we can go to a shul anywhere and fit right in.

Bris: Brit milah is the covenant of circumcision. It’s such a core part of Jewish tradition: A male child is circumcised on his eighth day. My grandfather wasn’t just born in Rotterdam; he had his bris there too. There are key aspects of Jewish practice that we observe and witness, but there are also points of connection to Judaism in various ways, sometimes when we don’t expect it. When I showed the birth and bris certificates to people after the service, the bris certificate added more depth than the birth certificate alone would have. He didn’t just have a Dutch connection; he had a Dutch Jewish connection (or, in the wording of the bris certificate, Nederlandsch-Israëlietisch).

Diaspora: After the service, one young man verbally translated the birth and bris certificates. On the latter, there was a line asking where my grandfather was from. The answer given was “Emigrating.” There were parentheses drawn by hand around the question, as if to acknowledge that there was no actual answer. He wasn’t from Russia, he wasn’t from Holland, and he wasn’t from the U.S. He wasn’t from anywhere. It seemed symbolic of the Diaspora, how the Jewish people were scattered about. This theme was reinforced by the fact that he was only there because the ship was en route from Russia to the U.S. This was later explored further when I took the harbor cruise, realizing the scope of Rotterdam’s main claim to fame: Europe’s largest port. 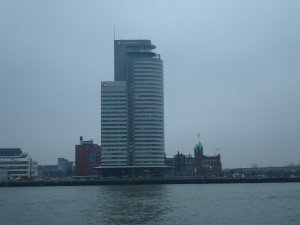 The port of Rotterdam, as seen from a boat-ride

Destruction by Nazi Germany: Before arriving in Rotterdam, I thought about how if my great-grandparents hadn’t taken this trip to leave Russia (and if my other great-grandparents hadn’t emigrated), they would’ve likely been killed in the Holocaust and I never would’ve been born. It’s an eerie thought, but it’s hard to ignore that it’s the flip-side to what they did do. In May 1940, Germany decimated Rotterdam in a 15-minute air bombing campaign. It was the only Dutch city that Germany attacked, and the Netherlands surrendered shortly afterward. To sum up, Nazi Germany destroyed Rotterdam in World War II. It was a stark parallel to what would’ve happened to my great-grandparents had they stayed in Europe (and what did happen to my extended family). 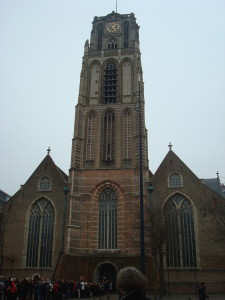 This church was one of the few buildings in Rotterdam to survive Germany’s attack. Because of its height, the building had strategic advantage for Germany. This photo shows the church in contrast to the decimated city.

Rocks: While I was on the walking tour, I placed some rocks from the ground in a Ziploc bag that I’d specifically brought for this purpose. There’s a Jewish custom of putting rocks on the tombstone upon visiting someone’s grave, and I thought it’d be a fitting tribute to bring rocks from my grandfather’s birthplace to his grave. On the ride back to Amsterdam, I thought about how my way of thinking about Rotterdam was in part shaped by stories about tracing family history, like Everything Is Illuminated, and I watched the movie in my hotel room that night. In the film, the main character finds the remnants of his grandfather’s shtetl in Ukraine, takes out a Ziploc bag he’d brought with him, and places soil in the bag so that he can bring it to his grandfather’s grave. I was weeping when I saw this. Although I’d watched the movie years ago, I hadn’t remembered this scene and I came up with the idea on my own. I felt so connected to Jewish customs and more by having engaged in an action that clearly wasn’t unique to me. I experienced these powerful points of connection with my Jewish background throughout the day.